Historically, Spacemesh design was created in opposition to proof-of-stake tradition: it is enough to buy storage, initialize it, form a proof-of-spacetime and announce this proof as an ATX to become a member of an epoch. This way the participation in Spacemesh blockchain is supposed to be “fundamentally decentralized” and resistant to censorship.

Unfortunately this pushed us into problems - which can be summarized as follows:

I am creating this thread to bring together overall discussion around fixing this problem. In other words I would like us to bring ideas on introducing ATX-level consensus in Spacemesh blockchain so that eventually we can pick the best one.

I am using the term “smeshers(n)” as a shortcut of “the agreed collection of Spacemesh blockchain identities participating in epoch n”, where “agreed” means of course “agreed by running a specific consensus protocol” - this consensus protocol is currently not existing and we are trying to introduce one.

Let me start by throwing 3 random ideas by myself.

The way to do it is:

Whether or not the bonding transaction has a principal and therefore is subject to normal payment of the gas is a design decision to make. I think both options have its pros and cons.

Naturally, bonding transactions would be flowing-in constantly. Smeshers(e) would be then “frozen” at layer firstLayerOf(e) - K, where K is a protocol parameter (I would suggest K=864, which corresponds to 3 days). The K distance is there to ensure that that the finalization of smeshers(e) is strong enough at the moment of epoch beginning.

The beauty of this solution is that we simply reuse already established consensus mechanism to get a consensus on ATX list, so we do not introduce anything fundamentally new.

This idea can be seen as a subtle refinement of the previous one.

Long time ago we decided that Spacemesh blocks - contrary to Ethereum - do not contain a pointer to parent block. This design decision allows for some more flexibility and performance optimizations (Hare operating independently from Tortoise and consensus-execution decoupling). On the other hand, the price to pay is dealing with “reorder” phenomenon and some other complexities.

For clarity, let me introduce short names for these two competing patterns of blockchain structure:

Our current Spacemesh design is based on having 2 blockchains which run in parallel on the same P2P network:

The new design I propose would be:

The ATX-chain would be just yet another independent blockchain, reusing the already established Hare and Tortoise machinery as-is, with the following differences:

Let me say something more about the execution of transactions and the structure of the global state in ATX-chain:

Now comes the trick with how ATX-chain defines smeshers(n). Please notice that now we have two blockchains (ATX-chain and TX-chain) with independent epochs (and shifted by K days). However we will define things so that members of epoch N are the same in both blockchains.

Hence, immediately as a new epoch starts, we know who are members of this new epoch. Why this is working without waiting for the consensus to happen ? Well, because the underlying tree structure of blocks ensures that WHATEVER path of blocks will be finally selected as the finalized consensus, every path determines smeshers(n) for all n values.

Now, the last thing to do is to propagate the consensus on smeshers(n) to TX-chain. In this case we HAVE TO wait for the consensus to happen, so this is why we need the shift between ATX-chain epochs and TX-chain epochs. We simply define smeshers(n) in TX-chain to be the same collection as smeshers(n) in ATX-chain (but the epoch n in TX-chain will of course start K days after the same epoch in ATX-chain, hence by that time we hope to have good-enough finalization of last block in layer n-1 of ATX-chain). 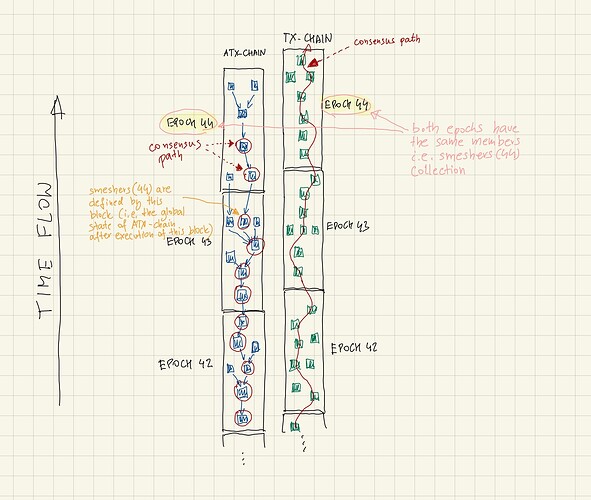 This solution would work well only if we are able to shape incentives and overall Spacemesh design so to observe approximately constant flow of ATX-es across the timeline of an epoch.

The idea is to reuse already established infrastructure of Hare/Tortoise. Hare establishes consensus on collections, where elements of collections can be “anything”. Say elements of the collections in Hare are “marbles”. So far we had marbles to be proposals. In the new solution we will have:

The ATX parts of all block are considered as registry of incoming ATX’s. The deadline for providing an ATX for epoch N should be some K layers before the beginning of epoch N (say … 3 days). Then, smeshers(N) is formed up as a sum of ATX parts of blocks up to the “deadline” layer. Of course nodes mush also manage the buffer of ATX’s they see, which did not make it into the blocks yet. This is analogous to the mempool on fact.

Or, should I say, the whole solution is pretty much a copy of “Idea 1”, just being more verbose in the way we represent global state and showing that “Idea 1” can be implemented with relatively minimal changes to the existing codebase.

Thanks Wojtek. Lots of good food for thought. I’m looking forward to discussing this on the call tomorrow. Just a few quick preliminary thoughts: